I mentioned that a couple weeks back was my birthday.  I didn't mention that I decided to embrace my middle age by celebrating my childhood.


One quick preface: I love birthdays.  All birthdays.  I think it is such an easy way to celebrate life.  I felt a little self-indulgant as a younger person because of this love of the b-day but as I get older I am more confident in my silliness.  A trait that I really hope to pass along to my kids.

One of our first purchases as a pre-family was a ridiculous foam birthday cake top hat.   We bought it at a time when spending 25 bucks on a purchase that had absolutely no true purpose was a questionable use of valuable resources.  However, for the past six years I have found so much joy in our little hat and have been thankful for the splurge.  My kids look forward to birthdays and the joy of special breakfasts, toasts and yes, my little sponge hat. Net/Net in this house we live by the rules: Life is awesome. Eat Cake.

This wasn't a particularly easy year thus far with many seemingly simple things not being all that easy--too many logistics, some post-partum funk and a little apprehensive about turning 35 (a year I thought marked the official passage into the "finally get your shit together" zone of adulthood).  Given that my general attitude for the last several months has been falling into the range of pensive to angsty, I decided to take a moment for some shameless joy.

How does one bring joy?--- well, you throw a Double Dare birthday party.  I wasn't sure if people would play my reindeer games since this was my first big party since coming to Ketchikan but boy, did the Ketchie's bring it.

Some of my favorite parts:


I had so much joy prepping for this one-- sometimes a little shameless joy all you need. 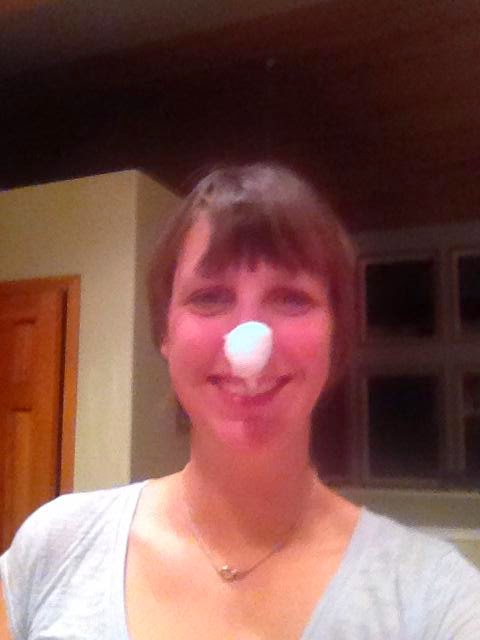 Email ThisBlogThis!Share to TwitterShare to FacebookShare to Pinterest
Labels: Me

My little birthday was oddly reflective this year-- 35, folks--which seems like a big turning point.  Combine my inward focus with a rainy day, a pre-schooler, two toddlers and an infant and even the most SSRI'd out there would reflect on their life path.

It was a quiet little day on the island.  I met some friends for coffee then hung out with Mo for most of the day.  I had planned on journaling and setting some life goals but a colicky** baby got in the way of my awesome self actualization.  Oh well.

The kids did surprise me with a little dinner at home.

Moira and I went down stairs to check email (nurse)  and about one minute later I heard a chair moving across the floor above me.  Those of you with kids in the same life stage as mine know that the scraping rattle of a chair being moved is very, very dangerous.

Anywhoo-- I decided not to check it out, but instead call to the four year old*** to tell the two-two year olds to stop it.  He confirmed with an "ok".    So, I think we can all agree that this was a bad idea

Ominous noises continue and  I holler again to James who comes down.  I ask what he is doing and he says they are making me dinner.  Good. I ask him if they made a mess-- and he responds in a series of rapid fire statements:

Then I hear upstairs a bad stage whisper: "Guys, GUYS. We have to CLEAN UP."    "GGGGUUUUUUYYYYYSSS!!!"

I have a pretty good idea of the bad news that's going on upstairs at this point but decide to give it thirty seconds so that they have at least a fighting chance at reducing the damage. Moira, still attached to me from our feeding/email session head upstairs to see this.

On tonight's menu: No bake quesadillas.

I put M in her bouncy seat and started to clean up but Moira disagreed about this plan (likely fear of falling cheese) so I sat back down with her, nursed some more and snapped some photos.

Then, I called the babysitter to come a bit early.


Mo and I went out for a girls date, journaling, self-actualization and a little alcohol.  I'd call that a success.

*Alternate title: "Get the Cheese off the Baby."
**I think we are getting close to calling that formal diagnosis. . . . wow, girly gets UPSET.
***A perfectly responsible proxy parent.
Posted by Dana at 5:16 PM 1 comment: