Back to our Regularly Scheduled Programming


We are settled back in after Nana and Pop Pop's trip. We had a great time visiting with them and are now back into the routine-- the final week of school in fact.

Here are some highlights from our time with them.  (Unfortunately blogger has been a little finicky lately which is why pictures will be limited and posting in general has been light.)


Fishing:  Matt and his dad clocked many hours on the new boat. They caught a cod and a sea cucumber but otherwise struck out on the fishing front.   However, we hit the jackpot when it came to crab!  We laid five traps and ended up catching around 20 crab--of which we kept 8, ate 3 and froze 5.  We're having fun creating new crab recipes-- turns out I make a kick ass crab cake. Matt ranked me number 2 all time behind Salut in Minneapolis.  Either way, I* thank him.  He's a tough critic! 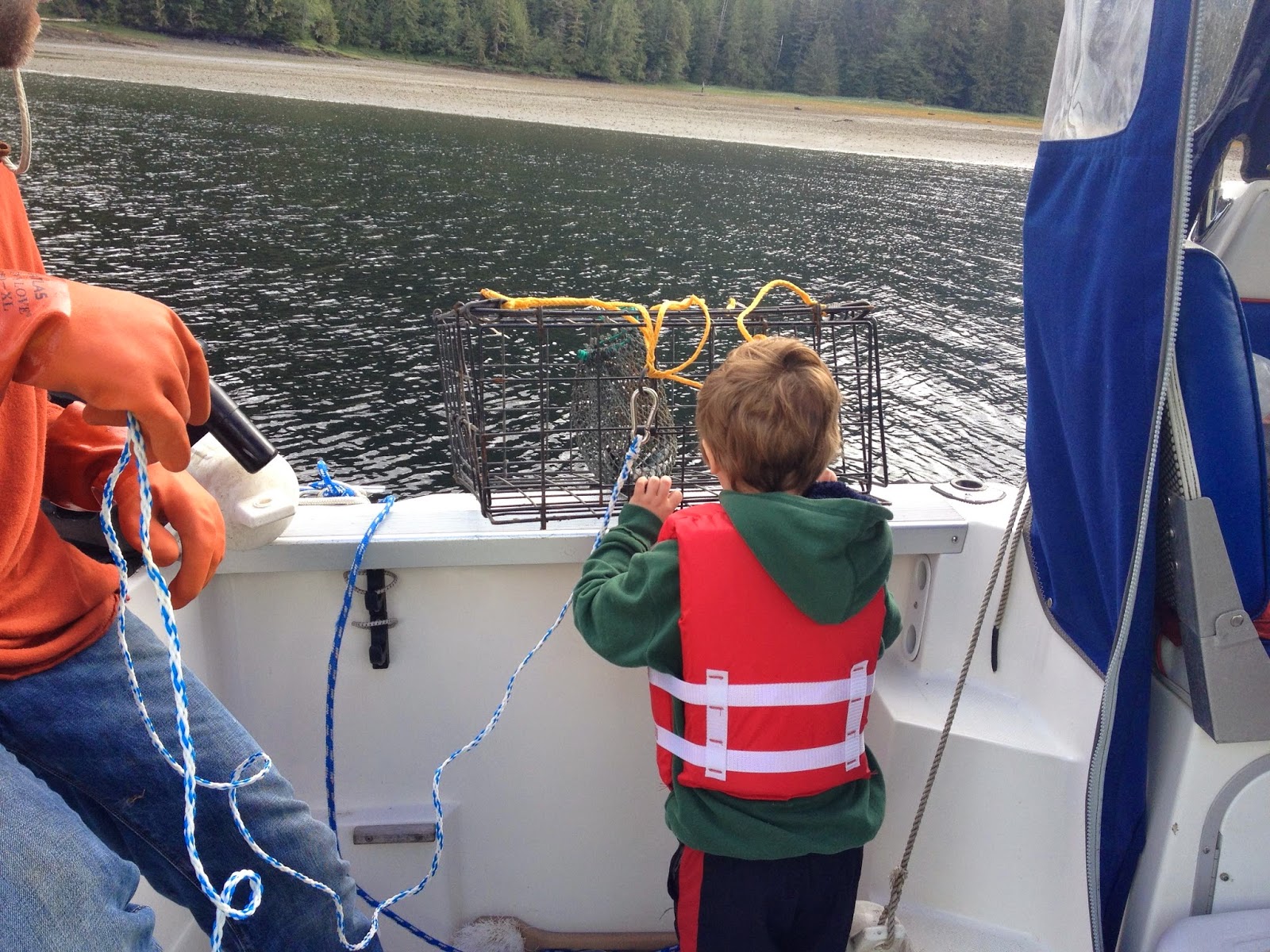 James had the unfortunate incident of dropping his pole into the water- which prompted a very sad day in a little boy's life.   We have been practicing the phrase "sometimes things happen" a lot right now but it would appear this phrase only works when you actually don't care about the thing that happened-- like spilling a little on the floor etc.  When you slip and get dunked in the ocean with your clothes on this phrase is wholly ineffective.**

Hiking:  We went out and did a loop near some waterfalls and it was beautiful.  It was the same walk that Matt and I did when we were thinking about Ketchikan as a future home-- it's green and rainforesty and everything I like about Ketchikan.   We then looked for starfish and did our best to re-populate the ocean with rocks. ***

Lumberjack Show:  One of the more advertised tourist spots is a lumberjack show-- we went because we thought the kids would like it and since Matt's dad works in a lumber related field, we thought it would be interesting. *** We all loved it-- James especially.****  It got a little loud at parts but James did well and managed it. It was actually really fun and hokey.  It seemed like the guys were having a blast out there and I only worried about the safety of their appendages about 14 times.

General Merriment:  We had some great meals, great conversation and lots of Nana lap time.  Well, not me.  I weigh twice as much as her right now. . . but the rest of us did.


Now we are back to our little life-- except our little life is a little busy right now.  Matt and I are both working quite a bit this week and James had his last day of school yesterday. It's been beautiful, so we have been trying to get the kids outside and enjoy all that Ketchikan has to offer!


*And the bastardized version of the Paula Deen recipe I used.

**As learned last night during a rapid wrap-up to an otherwise very fun beach bbq.
***It made a difference to that one.  Wait.

****And it's super affordable for locals.
*****James is now a lumberjack/ninja/karate guy football player.

Email ThisBlogThis!Share to TwitterShare to FacebookShare to Pinterest
Labels: Family