Sweet Baby Girl is ONE


This is late- but not forgotten!   Our poor girl-- I have been determined to not miss these milestones with her but we accidentally locked ourselves out of the office last weekend.   We certainly won't forget that you are growing up-- you remind us every day.

You know,  they say that no two kids are alike.   Yep, captain obvious. Well, I didn't really get that until there were two kids.

On Daisy's birthday, James helped make the cupcakes for the "party." James did the frosting and the sprinkles and mentioned, oh, I don't know. . . . 44 times that he was going to help blow out the candles.

So here is a clip of what happened.  We sing the song.  Deirdre is pretty chill and when it's time for the big moment, James gets up in all its pageantry to blow out the candles.

What you don't see on the video is indicated by the gasp.  While we were watching James "prepare" to blow out the candles,  Deirdre took two fingers and pinched out the fire.    James proceeded to funnel his dramatic spirit into an awesome temper tantrum*  Deirdre proceeds to act like sticking your hand in fire ain't no thang.

So yes, my two kids are totally different.   The one we celebrate today is belly laughing toddler who is fiercely independent, confident and can extinguish fire with her bare hands.**

*For those of you with littles, I fully recommend the melt-down video.  It's awesome to recollect over a glass of vino.
**Let's hope this doesn't become a party trick during your teenage years.

James now likes to talk on the phone-- which is awesome for this travelling mama.   On the way home from the airport on V-day I called James and the conversation went like this:

James:  Hi mom.  I want a piece of cake.
Dana:  You do?  What kind of cake are we having?  Chocolate?
James: NO
Dana: Pink cake?
James: No, WHITE cake

He then handed the phone over to Matt, who was indeed busy making an awesome V-day dinner for the fam.

Dana: I guess he ruined the surprise!
Matt: Nope,  we don't have a cake for tonight. . . that was a hint.

Email ThisBlogThis!Share to TwitterShare to FacebookShare to Pinterest
Labels: Family

The Red Thread of Adoption 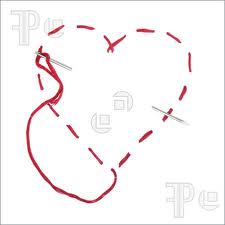 On this Valentine's day I am thoughtful about a little boy who is soon to join our family.

After three years of preparation, I have almost news - we are at the top of the list at our agency.  Exciting, I know.  I also have met enough people who have been in this exact same position and devastating changes in government or policy have had them back at the start line.   I am being careful with my heart but damn, it's exciting and awesome.

I recently was introduced to the idea of the Red Thread of Destiny.   In adoption, this is the idea that families are bound together by a red thread.  Families that are separated but meant to be still find a way to join together as one.

Speaking of faith-- this seems to be a beautiful philosophy to subscribe to right now.

There have been times where I have wished that this process would have been faster or more predictable but the red thread would indicate that the child meant for us wasn't ready to come yet.  God in divine wisdom would know when we were meant to be together.

I have decided to approach this from a place of love, respect for the process and optimism.  I have started to think of him as a very real little boy and have started to make preparations of him joining our family: Work has been told,  significant obligations put on hold, and love ready to be shared.

So on this special valentines day, I am thinking about my four loves-- the three family members in my little house and the little one in Ethiopia waiting for his forever family.
Posted by Dana at 2:07 PM No comments: 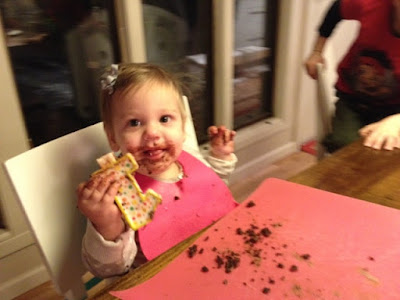 Dana: What are you wearing to the concert?
Matt: I am wearing my skinny jeans.

(pause)
Matt: Well, they were just jeans when I bought them, but now they are definitely skinny.


HOTY* is taking me to the Lady Gaga concert.  I will be wearing my sweater set because it's what I own.   Now who's a hot mama?

*Husband of the Year
Posted by Dana at 3:54 PM No comments: