"It seems the kingdom of God is made up of 'the least of these.' To be present among them is to encounter what the Celtic saints called 'thin spaces,' places or moments in time in which the veil separating heaven and earth, the spiritual and the material, becomes almost transparent. I'd like to think that I'm part of this kingdom, even though my stuff and my comforts sometimes thicken the veil. Love, joy, peace, patience, kindness, goodness, faithfulness, gentleness, and self-control -- these are God things, and they are available to all, regardless of status or standing. Everything else is just extra, and extra can be a distraction. Extra lulls us into complacency and tricks us into believing that we need more than we need. Extra makes it harder to distinguish between 'God things' and just things."

Email ThisBlogThis!Share to TwitterShare to FacebookShare to Pinterest
Labels: Faith

Sweet gal is squawky!    We had some cute little milestones over here that would just melt your heart-- at least they did mine.

Deirdre is talking up a storm!   Most of it is babble and exploration but we have had some great approximations with clear intention.  We can now say hi and bye and momma, dadda, cheese (as in say cheese for the camera) and cookie appropriately.

With James we had just been starting the early intervention program for his hearing loss so we were tracking pretty specifically to different language milestone-- with Deirdre it has been a much more organic (and dare I say it, pleasurable) experience.

She is getting to be a total hoot overall-- she remains our instigator and we can see that her wheels are turning a bit more. . . I suspect we aren't far from walking at this point-- maybe another month or two. . .suddenly she is finding that crawling isn't as fast as she wants it to be. . . so we will see if she has the patience to learn a new skill amidst all the wrestling and teasing that is going on in our house. 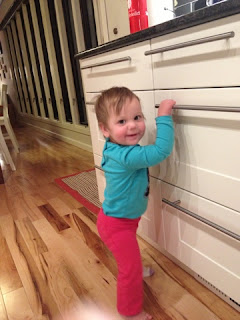 A while back,  say nearly a year,  I talked briefly here about missing my mom around the time that Deirdre was born.

We recently honored my mother's 18th anniversary of her passing.*  More than other years, this was especially a thoughtful time for me.   I do think there is something to be said about the mother-daughter relationship and there was a lot more at play within my family dynamic.
﻿﻿ A friend of mine sent me flowers-- which is always such an amazing treat.  The flowers were actually a cactus reminding me that it is ok to be "prickly."  18 years is such a significant amount of time but there are times now and then when I still get a little teary thinking about her and what our relationship could have been.  Who I could have been had she been with me longer.   Prickly is such a lovely word to describe grief- especially a grieving process this long.

I have amazing friends.

So let's talk about how incredible that is. . . .  No one wants to lose someone close to them but I have been supported and cared for by a pretty neat group of gals since.  It is amazing to be loved.  At the end of day, it's always been and always will be about love.

We have been starting some advanced anatomy talk and in general are taking the approach that we will use the technical terms for things.  Unless it's funny.

So a few weeks ago we realized that James calls nipples "meatballs".

From your mouth to God's ears.
Posted by Dana at 3:53 PM No comments:

I have been absent here lately-- we've been busy-- traveling, working, nesting. .  . the life and times of the Fitzpatricks.

So what is new?  Not a heck of a lot.  I feel a bit obliged to circle back on some topics and close out the last month.

For a while I was sure that there were some changes coming my way-- I mentioned here that I had some funny feelings that a change was coming our way- but time came and went and it appears to be steady eddy over here.  I am not complaining as I seem to have no problem getting into my own mischief just fine without it coming to look for me.

For the time being we are sitting tight and focusing on finishing up all that we started.  aka. the house.  I promise I will put pictures up as soon as I can!

It is also that time of the year where we start thinking about what it is our family is about. . .

The first year that we did this annual theme we focused on gusto.   I know that any parent to young children will validate how quickly life turns into a cycle of laundry, meal times and diapers.  Oh and making a living.   That year was intended to focus us on living out of the box, making memories and embracing life fully as a family with young'uns.

The second year was about health.  We decided to be a little more concrete about our goals and I am pleased to tell you that we did pretty well.


Now for 2013.  We DEBATED AND DEBATED this one-- there is so much that makes sense for us right now-- but when you want to boil it down to a single word or theme finding that word is very difficult.  The words that seemed to fit the best were largely reflective, inward and heady-- unfortunately all difficult things to blog about without being a total narcissist. *

One week into the year we have heard some maybe, sorta, trying to not overplan, positive things about the adoption and suddenly the word seemed to present itself:  FAITH.

So there you have it-- This is the year of faith.  We have a lot we are presenting up to God to determine for us in our life.  Faith.  We also want to improve our relationship with God.  Faith.  I also find that this time of year, I can get a little wrapped up in the darkness of the season and want to assume the positive. Faith.

Faith just fits us so well right now.  So there you have it.

In other news, I would like to be a better little blogger.  I have started a bunch of topics here and never circled back so I am resolving to be a little better about finishing out topics and being honest about what is going on (when possible.)

So let's start:  The last month was busy.  We didn't do a whole heck of a lot for Christmas as our house was still in shambles**.  We did go to Florida and I managed to fly with two kids by myself.  Rawr!   Matt went to the BCS bowl game last weekend and I have resumed my tasks (and travel) for my new gig at work.

**My life-long dream of having a giant inflatable Christmas character in my front lawn was once-again left unrealized.
Posted by Dana at 4:48 PM No comments: