Despite being on my second kid, I have learned a lot about breast feeding in the last week.

I hit a crossroads with the boobs recently.  My pump started acting up and I was heading out of town for four nights.    So. . . it forced a conversation about whether or not I wanted to continue.

I am not sure if I will have another child biologically which takes away the cost benefit of pumping for me. . . * but I do believe there are nutritional benefits to pumping and I kind of like it this time around**.

So shopping I went to buy a breast pump for my trip.  I started with the Avent model.  Now, the Avent model is $100 less than the Medela and reviews online seemed to show that customer ratings were pretty similar.*** 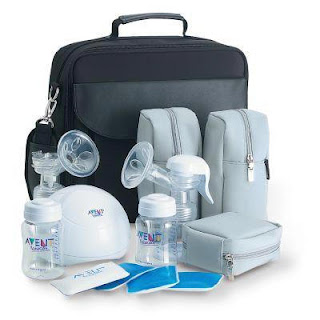 I returned this guy-- here's why.

Other comments: I did call customer service and they were awesome.  They offered to fed ex me a new device overnight-- unfortunately I had a flight to catch and that wouldn't work for me.  Two thumbs up for Phillips though.

Next up the Medela Pump In Style 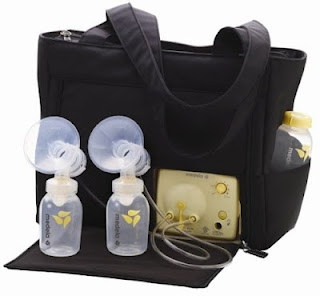 I'm in love.  The device is incredibly thoughtful. . . works better than either devices I had tried (the Lansinoh or the Avent).  The difference is really noticeable.  The bag is great, the bottles and cones are easy to clean, it's quiet and a snap to set up.  lovies. . .sigh.

I also experienced the joy of pumping in a bathroom stall while traveling.   :( I had a small hand pump from Evenflo that made my hand cramp. . . I decided to stop at Target in Nashville after my first day and upgrade to the Medela hand pump. . . also a huge difference in experience.   Just way. . .way better.   The price tag on all these pumping accessories was a lot (gulp) but I feel a lot more confident in keeping this up for a while.

I am still going to supplement with formula since Deirdre is a skinny one.. . . 80% height, 20% weight. . . and I am not producing as much during the day as she is eating in formula.  However, working from home makes it easy to pump and give her what I can!

*God knows I love me some Craigslist, so at worse case I can sell a new pump after I am done.  Or I can have a third kiddo.  (faulty logic, I know ;) )

*** My first pump was a lansinoh which stopped working after about 4 months of use, so I didn't look at this pump again.
Posted by Dana at 10:02 AM