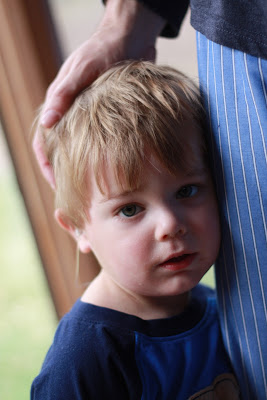 We recently spent a week traveling to Virginia and Florida to spend time with our far away friends and family.  It was a great retreat for us and in James' opinion-- any chance to go on a plane is a worthwhile endeavor.

On the plane ride home, there were a couple pre-teen boys who sat behind James and who were openly discussing his hearing aids.  We could hear them debating whether or not he was listening to something or if they were some sort of mechanical device.   At some point they figured out they were hearing aids and they started mimicking my chatty, chatty son.*

I don't mind these interactions at all-- in fact, I think it's great. I like the honesty, the curiosity and the genuineness of the inquiry.  I also like that everyone assumes the best.

The interaction usually ends with them commenting on how well adjusted he is to the aids.  Yep- they are part of his uniforms-- shirt, pants, socks, ears.***

Smaller people are also noting the hearing aids now-- and up until now they have all been an honest question. Usually I just describe them as eye-glasses for the ears.  Most of the under-five crowd seems to understand this analogy, bless it as cool and move on. . . . However, I have been dreading the day when it was no longer 'cool.'

James didn't realize that he was being made fun of-- which is probably a blessing at his age. . . but wow folks, how do I prepare for this?   I know all kids get made fun of-- it's what kids do. . . but it breaks my heart to see my baby have such a conspicuous excuse for teasing.

Be strong my bionic baby.

*James was repeating** 'Excuse Me, Daddy' over and over again.  If you are going to be the butt of the joke-- say something polite.  We are so proud.

***It took us a long, long time to get to the point where a toddler wearing hearing aids wasn't a constant fear-- but we made it.  High fives all around.