So where did I leave off?   That's right. . . it's midnight and I am in my new room with my somewhat cranky nurse, Cindy.    Should have been named Olga.

Given the fact that I hadn't shown any progression since my last visit, I was told that I could either start pitocin or try walking to bring on the contractions.  I was induced with James and really wanted to have a more natural birth experience.  Please note-- I am saying MORE natural not TOTALLY natural. . .  This is important later in the story. . .    My birth "plan" if you remember was to start naturally and play it by ear.. . .but that ear would probably (definitely) involve an epidural.

So we begin walking laps.  I am still laughing a lot at this point and my husband is channeling his inner stand up comic.  We walk for about an hour or so and I am having contractions that make me stop and breathe.  We were timing them at this point and they were about two minutes apart.

After a while, I decided to try the bathtub which was near miraculous. I could still feel the contractions but they were so much more mellow.  All the time that we are doing this- Joan my MIL is hanging out in our room reading our collection of trashy magazines and giving us her viewpoint on the Seal/ Heidi break up from the other room. It's a lot like a slumber party except nobody painted my nails.  Next time.

Everyone is feeling pretty good about life until I got out of the bath and realize the contractions are much more painful than they were before the bath.  Olga checks and I have advanced half a centimeter to four.  The slumber party is now less fun and it looks like this baby isn't coming in the near future.  At this point I am tearing up with the contractions and think, "life experience-- check."  An epidural is a good idea.

We call the epidural people and are told that they have another woman to do first.  boo friggen hoo.  The epidural lady eventually shows up at 2:45 and this was a very long 45 minutes to wait.  Very long.   She is wrapped up at 3:30 and I am more comfortable.  The slumber party continues!

I put on my headphones and cuddle up with Downton Abbey.  Joan and Matt both make their 'beds' and we decide to nap for a bit.  Olga says she is going to let the epidural set in for a bit before inserting a catheter since it is 'uncomfortable'.  We have a brief discussion about how hospital uncomfortable is really code for 'painful'.   Olga says she will return in a bit.   I am not entirely pain free at this point, legs are still able to move but the edge is taken off.

A mere 15 minutes later,  I had just closed my eyes and suddenly was in a great deal of pain again.  My belly was REALLY upset and I am pretty sure I started yelling-- which isn't a pleasant way to wake up from a cat nap.   I couldn't describe the pain well other than I thought that maybe the veggie lasagna from earlier in the evening was now causing issues or some other trouble was brewing but Olga suddenly became pretty concerned about my screaming.

Olga checked me and said something about being "complete" as she ran out of the room.  I didn't process that right away since I was too busy yelling "ow ow ow ow ow."  Matt seemed to catch the word "complete" a little faster and was up.  Olga came back into the room and we clarified that in the last hour or so I had gone from 4 to 10 and the baby was crowning.   Awesome. . . except as the rest of us were very much awake, my OB remained blissfully asleep in his bed at home.

I started panicking at this point and was instructed to lay on my side with my legs closed.  It's 4 am  and I am starting to have some frank conversations with Olga about pain management.  Why is this epidural not working??  Turns out that the epidural gets stronger over time and my fresh epidural wasn't up to the task at hand yet.  This didn't seem like a valid excuse and I start bargaining and naming other potential options for pain.   (This is between contractions.  During contractions I go back to yelling.)

Another nurse comes in and they start whipping out the dental instruments and readying the room.  Joan and Matt put their beds away and we wait for the doctor to commute in for the morning.   I am calculating his drive time at this point and hoping that he didn't stop for coffee first.  I am also feeling caught between a rock and a hard place. I am petrified of pushing and feeling any sort of ripping but I clearly didn't think that remaining pregnant the rest of my life was a good option either.

He runs in at 4:15 or so, shoes untied and I am thankful that he understood the urgency I was feeling.   At this point they let me sit up and get me in position to push.  Naturally the minute I sit up, the contractions stopped.  This gave me a moment to ask for local which my doctor had no problem giving.  Likely, the local probably hadn't set in by the time I pushed but I felt worlds better knowing that there was a back up system after the faulty epidural.

I pushed through the next contraction and one after that and she was born at 4:23 am.  All in all, she was very healthy at delivery and like James earned an APGAR of 10.  She was just determined to get herself into this world! 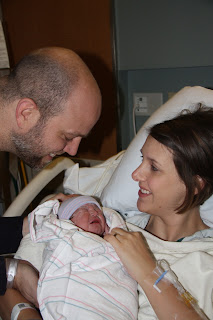 Closing reflections on birth planning:  I have rarely heard of a birth plan being followed to the letter so I didn't have one.  The next day we were talking about the dynamic hour that marked the birth of our daughter and Matt reflected on how my 'non' birth plan really was a birth plan after all which is probably why I felt some degree of panic and fear at not being prepared for a more natural experience-- hence my repeat comments to Olga about still being able to move my legs!  I have a lot of admiration for those that pursue natural child births but I think this is something that I would have prepared for in a more deliberate way: aka;  doula, classes and possibly the Rocky theme song. 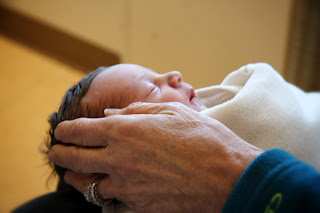 My birth plan was to have a lot of options and some time for me to exercise those options.   I am slightly embarrassed at how much I lost it in the last hour of the delivery but I was really caught off guard by the suddenness of the situation and wasn't prepared mentally (no Rocky) for an urgent situation.   Fear does funny things to people.

Closing reflections on child delivery:   If you want an epidural, get it early.  (*Just in case you skip a bunch of numbers.) 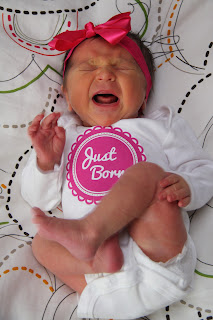